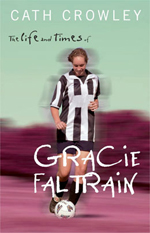 After feeling a little disappointed by Graffiti Moon, I was pleased to spot The Life and Times of Gracie Faltrain in my local library, because I had enjoyed Cath Crowley’s style while not really appreciating the subject matter of Graffiti Moon as much as I could. Luckily, The Life and Times of Gracie Faltrain is far more my sort of book, combining as it does my favoured realistic YA subjects of friendship, family and a smidge of romance with a sport-based plot.

The Life and Times of Gracie Faltrain is a lot shorter than it looks, due to Crowley’s interesting use of extremely short chapters at times. The novel is told from the first person perspectives of most of the characters mentioned in it, including Gracie’s parents. Usually, this is a fun way of exploring the plot from multiple viewpoints, but it does feel a little jarring when the characters respond to what other characters have written as this only happens a couple of times with the characters mostly remaining unaware of what other people are thinking about a situation.

Crowley’s use of so many perspectives allows her to include my favourite aspect of this novel – Gracie’s parents’ thoughts on her and their relationship with each other and as a family. It’s an insight that is so rarely found in books for younger readers and while there’s a possibility that a section of Crowley’s audience will be uninterested in what it reveals, I actually thought that it was great for a book to talk about the feelings behind family break-ups, rather than just the feelings experienced by children once they occur. We’re still shown Gracie’s intense pain at what’s going on in her family (and her denial of it and how these feelings influence her on-field performance), but the book goes beyond that, making it better. Similarly, conflicting accounts of events through Gracie’s and Annabelle’s eyes show that Gracie isn’t always an infallible narrator when it comes to her behaviour.

Because Gracie is flawed – very much so. The way she plays soccer for the majority of the book will grate for any player or lover of team sports. She’s completely caught up in her own struggles and her own feelings and due to this she sometimes ends up treating the people around her very poorly. At no sense do you feel like she’s not a good person, but at some points she is very frustrating! She grows as the book continues, however, which is just what a protagonist should do.

I very much enjoyed The Life and Times of Gracie Faltrain and was glad I gave Cath Crowley’s work another chance. I’ll definitely look up more of her books.