Review: The School at the Chalet – Elinor M. Brent-Dyer 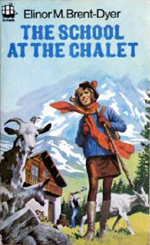 From the opening pages of this novel, there’s no escaping that it was written in the 1920s. The slang is an instant giveaway, and the ongoing casual racism throughout the book ensures that you never forget that this is children’s fiction written for a now-distant generation of children. The page about the Romany people is particularly gasp-worthy. Enid Blyton’s gypsies have nothing on Brent-Dyer’s “religious” superstition!

The School at the Chalet suffers from first book in a series syndrome, in that it’s very slow to get started. The initial discussion of the school is understandable, but then follows a boring account of three characters’ tourist outings in Paris, which seems completely unnecessary and indulgent. The book picks up once the school is actually founded, though, and soon settles into a cozy pattern of anecdotal stories about the school’s first few months.

One of the problems with The School at the Chalet, from a reader’s point of view, is that the character focus is too wide. At times, it seems like Joey is intended as the protagonist, but the perspective flits from one character to another, which becomes very confusing, especially given the long list of unusual names and names that sound quite like each other – Grizel and Gisela are particularly easy to confuse. Few girls are given distinct personalities, which adds to the confusion. Joey is very likeable, although her health issues are forgotten for most of the book, and Grizel and Simone are also a little more three-dimensional than most of the characters, but one would hope that there is more development in later books – or at least more of an effort to focus on one or two of the school’s students.

There is something to be enjoyed here for lovers of school stories, with several fun tropes being represented and the necessary level of unwitting homoeroticism. (Poor Simone has such a crush on Joey – or a “violent affection”, as Brent-Dyer puts it.) The writing leaves a lot to be desired, however, and there’s an overall attitude towards women and foreigners (running the full gamut from exoticism to demonisation) that is quite uncomfortable for a modern reader. And the final chapter? Well, that was just plain bizarre.

I wouldn’t refuse to read more in this series, but I wouldn’t rush to do so either.