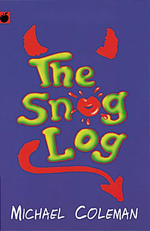 I’m afraid I just couldn’t like The Snog Log. Sure, it ends in a place where the male protagonist, Robbie, has finally started to realise that it’s not exactly a nice thing to do to turn his female classmates into objects, but there’s just not enough bite to the resolution to make up for the way the female characters are portrayed and treated for the rest of the novel.

I think part of the problem lies in the way that Mel is depicted. She’s not quite a co-protagonist, but her journal entries form part of the narrative, and occasionally there will be a confusing switch to her point of view in the main text. The trouble is that her distrust of boys (and men) seems to be included as a parallel to the behaviour of Robbie and his friends. So she is shown to be just as much at fault, because she fails to see that some boys (ie. Robbie) can be capable of good acts, as well as acting up in class and treating girls like crap.

There’s a big issue with this. Namely, Mel is right to distrust the boys in her class! They are all using her and her peers as pawns in their snogging bet. They pretend to be interested in these girls, then attempt to dump them the moment that they’ve reached the maximum snogging score. Girls are rated according to how easy it will be to snog them, and constantly discussed solely in terms of their physical attributes. How, then, does Mel’s change of heart serve as an appropriate parallel to Robbie’s startling revelation that perhaps girls deserve to be treated with respect?

I’m not saying that there aren’t teenage boys out there who are a lot like Robbie and his mates. There most definitely are. I just feel like the female voice in The Snog Log is unauthentic. I actually think that the novel would be more palatable if there were no female perspective, but rather if we were shown Robbie’s character progression without the juxtaposition with Mel. Let the obnoxious boys be obnoxious boys; just don’t suggest it’s all okay, because look! sometimes girls think the worst of boys! (Never mind the long history of male-female relations that causes those girls to think that way.)

I think Coleman meant well when writing The Snog Log. After all, there is the attempt at a moral in the end. Unfortunately, however, the novel just didn’t work for me.