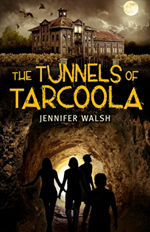 When Allen & Unwin announced the release of The Tunnels of Tarcoola, I knew I needed to read it, because it sounded just like a modern, Australian version of all of the Enid Blyton adventure and mystery stories I adored as a kid and still gain a great amount of pleasure from as an adult. Luckily, once I got my hands on a copy, I wasn’t disappointed at all. Jennifer Walsh has done a great job of taking a tried and true format for children’s mystery fiction and updating it to make it her own.

One of the great things about The Tunnels of Tarcoola is the way that it has such a strong sense of place. Set in Sydney, it has a very Australian feel with a solid historical foundation. Much of the mystery in the novel concerns events that happened during the Second World War, and Walsh does an admirable job of explaining the basics of the war to young readers without it feeling too didactic at the expense of plot or action. I was particularly impressed by the appropriately age-targeted Holocaust discussion.

While the mystery that the friends stumble upon has its roots in the past, the novel remains relevant to modern readers due to to its engaging characters. It takes a little while for the reader to get to learn about the cast’s individual quirks, but the characters are well distinguished both in terms of personality and their interactions with each other. There’s a very small amount of romance here, but it’s at an age appropriate level and doesn’t detract at all from the main focusses of the novel.

I did feel a little uneasy about the use of the term ‘slutty’ at one point, particularly as it was used to describe a group of twelve-year-old girls. It’s misogynistic at the best of times and, given its meaning, I don’t think the word has a place in a middle-grade novel. Likewise, the recurring theme of the police being dismissed as an option because they wouldn’t do anything about crimes against children struck me as being a dangerous opinion to be put forward in a book for young people – especially when it is a parent figure expressing that point of view. That said, I understand why this stance was taken in terms of plot advancement.

All in all, however, The Tunnels of Tarcoola was an extremely enjoyable read, with a great mystery and characters that are easy to become invested in – from Kitty, David, Andrea and Martin right through to the elderly Clarissa Woolf. There’s plenty of action and exploration, too, which ensures that it really is a worthy addition to the children’s mystery genre.

I would have no hesitation in recommending The Tunnels of Tarcoola to middle grade readers – or, indeed, to people of all ages who love the Famous Five books and other Enid Blyton series.