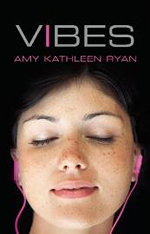 Kristi Carmichael feels forever on the outer, not least because she can read the thoughts of the people around her – who rarely have anything good to say. Her mother is a workaholic, her father’s disappeared off to Africa, the hottest boy in school thinks she’s sick and her former best friend can’t stand her any more. She responds with outlandish fashion and an impenetrable shell, but is it possible that she’s not as aware of people’s thoughts, motivations and lives as she thinks?

I picked Vibes up thinking it was contemporary realistic and only noticed the paranormal element – Kristi can read minds – once I actually started reading. As it turns out, though, this really does read like a realistic novel, with its focus being on relationships between family members, friends and potential partners. Kristi’s mind reading is almost incidental to the plot, revealing more about who she is than anything, so don’t discount Vibes as just another paranormal book!

Instead, Amy Kathleen Ryan has produced a strong work about teenage relationships and self-identity. It’s a story about the barriers people put up to prevent themselves from being hurt and about learning to see the people around you in a different light. And, if that sounds a bit deep, it’s also a very enjoyable and easy read.

Kristi is a very easy protagonist to identify with. Despite her outward expressions of indifference, she is actually a lot more vulnerable than she would have people believe, and her insecurities are ones that will be shared by many readers. She jokes about her weight and her unusually large breasts (although I hope the quote about going from a training bra to a C-cup wasn’t suggesting that counts as large, because no), but it is obvious that she is not comfortable with either. She also pushes people away, believing that no one could like her, and it is good to watch this change slowly over the course of the novel.

In terms of the three main male characters in Vibes, I liked Gusty immediately, despite the name! He’s attractive and popular, and Kristi initially gives the impression that he’s also stupid and unkind, but the reader quickly learns that there is more to Gusty than Kristi is willing to admit. In contrast, I was never able to warm to Mallory. He has a cruel streak that I felt wasn’t entirely negated by his kindness to Eva in the latter half of the book and I just couldn’t see him as a good influence in Kristi’s life. On the other hand, Kristi’s friend Jacob is lots of fun, and his loyalty to Kristy, even at her most prickly, is commendable.

Although much of Vibes deals with Kristi’s relationships with her peers, it also focusses upon her family life, with her father returning from two years in Africa and her mother changing jobs and spending a lot more time with her daughter. I thought that Ryan’s exploration of Kristi’s feelings (and behaviour) towards her parents was particularly well done. It’s hard to talk too much about it without spoiling potential readers, but I think that Kristi’s reactions seem particularly realistic where her family is concerned.

Although it’s a minor thing, I have to mention that I really didn’t like the final two sentences in the book. The annoying thing is that the third last line would have been perfect to end it on. [/end picky criticism]

Vibes is an enjoyable YA novel, with well-written characters and a great voice. I read it in a day, because I was enjoying it so much, and I’m sure other readers will find it just as appealing.