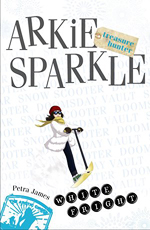 Three books into the series, I think it’s safe to say that I’m a fan of Arkie Sparkle. Sometimes a book series will have lost its initial momentum by this point, but I found that I enjoyed White Fright more than Time Trap, which is particularly impressive given that I enjoyed Time Trap more than the first book, Code Crimson. The characters have definitely come into their own by this point, and there is little need for scene-setting, so the reader is thrust straight into the action.

While the other books have largely concentrated on brilliant technology and journeys back in time, White Fright moves away from this formula a little, focussing instead upon the mystery surrounding the kidnapping of Arkie’s parents and the clues that the two cousins have to work with. This was a change that worked well for me, as the mystery captured my interest right from the beginning, and I’ve been jumping to conclusions ever since!

A new character is introduced here, which adds a whole new dimension to the story. What seemed like a fairly simple mystery in the beginning is now becoming quite complex and interesting. There’s also a little more discussion of Arkie’s emotional reaction to the loss of her parents, as would be expected as the initial excitement of the treasure hunt wears off and the reality of the situation begins to sink in. I enjoyed the glimpses into her family’s back story and the hints at the strong relationship that she has with her parents.

Most importantly, however, the Arkie Sparkle, Treasure Hunter series continues to be interesting, educational and a whole lot of fun. The plot is thickening, the cast list is growing and there are still four more days to go. I can’t wait to see where the girls end up next.

Meanwhile, if you’re on Tumblr (or just on the Internet!) there’s now an Arkie Sparkle blog to follow, complete with fun facts and character information. You can find it at http://arkiesparkle.com.