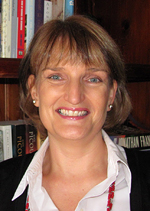 Today, I’m thrilled to be hosting an interview with Sue Lawson, as part of the blog tour marking the publication of her latest book for young readers: Forget Me Not, a historical novel set aboard the Titanic.

Hi Tara and thank you so much for asking me to visit your blog. It’s always terrific to chat about books and writing.

Thank you for joining me! Do you have a set writing regime? Has this changed over the years?

My writing routine has changed quite a bit since I first started writing. I used to write a paragraph and edit it into shape, write another one and edit that and so it would go on. Talk about a laborious process!

Now I try to write the first draft without editing until I am done. Sometimes that works, other times not so much. I have been know to chant – ‘just write it fix it later’ if I am really struggling with not tidying up before moving on.

The other thing that has changed is my notebooks. I started off just keeping one indexed notebook that had everything in it – editing notes, planning, goals, ideas and snippets of information. Now I keep a separate notebook for each book I write, a notebook for my bag and a general notebook. I feel about the amount of paper I use, so often my notebooks are unused out of date diaries – that reduces my guilt!

The research for Forget Me Not was so complex I had two books on the go! One for planning and one for research notes.

Do you have a particular process that you follow when developing your characters? Did you find that this process was different when tackling an historical novel as opposed to one set in contemporary times?

I do have a particular process for characters. Generally I create character profiles, characters collages and even maps of their homes, schools, streets, etc.

But my approach when developing Eve, Thomas, Hugh, Bea and the others was quite different when I was writing Forget Me Not. I did the usual character profile for each character, (I’ve attached a page of Eve’s) but didn’t do the collages. I did though trawl through books and the internet amassing hundreds of pictures of clothes, toys, furniture from 1912, and lots of pictures and sketches of the Titanic. These help make sure everything I write is as accurate as possible.

The other thing that differed in writing Forget Me Not was that normally I do the characters first and work the plot out around them. This time I knew what was going to happen, so had to create characters to be fit the plot. 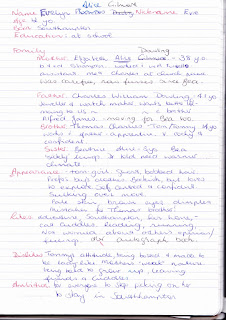 Some of the characters whom you write about in Forget Me Not – including Evelyn Marsden, who has quite a large role – carry the names and circumstances of actual passengers on the Titanic. Did you find yourself treating these characters any differently from those who were entirely fictional during the writing and editing process?

I deliberately used a few ‘real people’ to add authenticity to the story, and chose Evelyn Marsden because of her link to Australia. She was born here, learnt to row on the Murray River, near Murray Bridge and after marrying a doctor, returned to live in Australia until her death.

I spent a great deal of time reading as much as I could about her and a few of the other ‘real people’ to ensure I kept as true to character as possible. With Evelyn, I needed her to be a wise, empathetic and calm character. I didn’t come across anything that suggested she was otherwise.

It was certainly tough to write about real people, as I was mindful of being true to the actual events. I think I balanced it okay.

How did you tackle the research involved in writing an historical novel?

I love research – though research about the Titanic certainly sorted me out! There is SO much written about it, and so many differing opinions. At first it started to do my head in, but once I decided to go with the most often quoted detail, I found it much easier and more rewarding.

I guess one of the difficulties is that the ship sank a hundred years ago, so all survivors have now died, plus those who died on board could never tell their story, so naturally a little poetic license had to be taken. Also record keeping, while accurate in 1912, wasn’t as prolific as it is now nor as well maintained as it is now thanks to technology.

A lot of Forget Me Not’s power stems from the fact that it is based on a real life tragedy. What made you choose the story of the Titanic’s sinking as the focus of your book?

The Titanic chose me! On my way to visit the Titanic Exhibition at the Melbourne Museum in 2010, I dropped in on the Black Dog Books crew, who at the time were located in Gertrude Street, just near the museum. My publisher, Andrew Kelly and I chatted about books, writing and life, as we do, and then the exhibition, which he had just been to. Andrew asked if I’d like to write a junior fiction novel based on the sinking of the Titanic, to which I replied of course! My visit to the exhibition became one not just of general interest, but one of research. I was there for hours, scrawling away in my notebook. The photo I’ve attached is of the re-written. If you look carefully you might be able to make out the yellowed highlighted bits, which are facts I needed to include in the story. 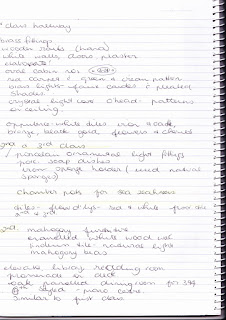 Great to talk to you Tara, and again, thanks so much for being part of the Forget Me Not blog tour!

Thank you for your time and consideration, Sue. It was fantastic to be allowed such an insight into the planning, research and writing process behind Forget Me Not.

You can read my review of Forget Me Not below, or find out more about Sue and her writing projects at her website: http://www.suelawson.com.au

Review: Forget me not – Sue Lawson